“I Really Hope I Can Do This.” 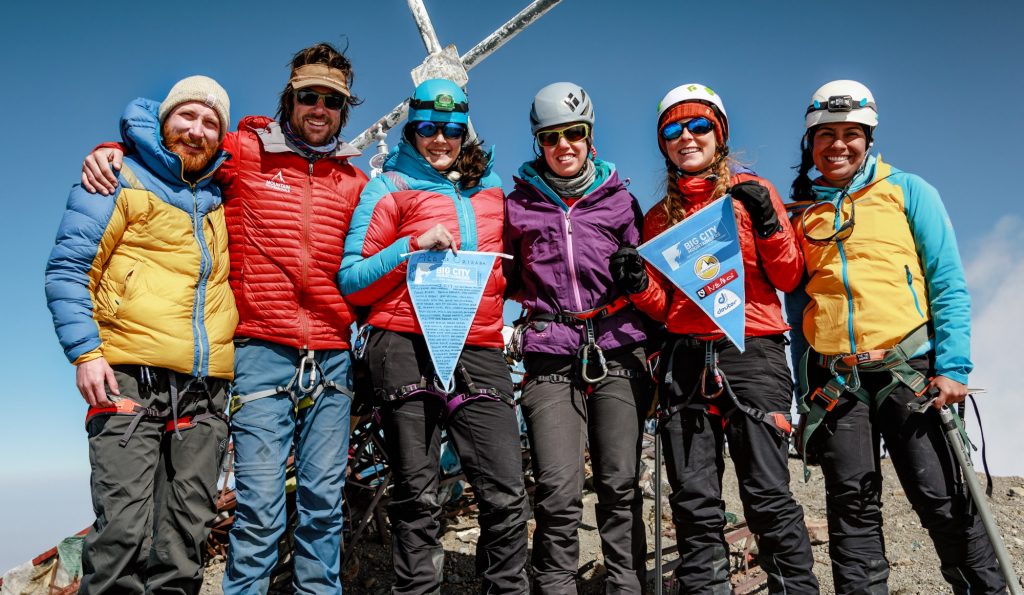 There have been two distinct times this year that my backpack has felt disconcertingly heavy: the first was after I loaded a full tent and all my glacier gear into it at the Piedra Grande Hut at 13,972′ on Pico de Orizaba (the highest peak in Mexico and third highest in the U.S.). The second was my instructor pack, complete with two bear canisters (one special one to cache for a last-night celebration) in the parking lot for the Savage Lakes trail in the Holy Cross Wilderness of Colorado. Both times, I thought, “I really hope I can do this” — and both times I finished with a sense of relief, accomplishment, and absolute pride in what had happened over the days between picking up that pack and putting it down for the last time.

Driving up to the hut, I felt the mixture of excitement, nervousness, and ‘wonder-about-how-this-is-all-going-to-turn-out’ that I’d felt before other big outdoor endeavors.

Rewind to January of 2017, when I, along with a group of three other women all associated with Colorado-based non-profit Big City Mountaineers (BCM), decided to climb Pico de Orizaba. The idea was to climb Mexico’s highest volcano to raise awareness and funds for the wilderness mentoring expeditions BCM runs through their Summit for Someone program. Orizaba is a big mountain, and putting the fundraising and logistics together in a matter of weeks was a big task, but we did it and landed in Mexico City on March 4th.

Driving up to the hut, I felt the mixture of excitement, nervousness, and ‘wonder-about-how-this-is-all-going-to-turn-out’ that I’d felt before other big outdoor endeavors. I went on my first backpacking trip as a junior in high-school with no idea of how it would change my life. I don’t remember a lot from that trip besides making a point to buy a tie-dye long sleeve (cotton) t-shirt to take along and how peaceful it was camping next to an alpine lake. I remember listening attentively to our guides, thinking they had the coolest job in the world, and finishing packing over an alpine pass somewhere in Colorado and realizing I could do anything in the world after that. Since that trip I’ve been on countless personal and professional outdoor trips, so the whispers of “Have I trained enough?” “Will the weather be good?” “What did I get myself into?” and “This is going to be awesome!” that circled in my mind on Orizaba felt familiar and not-so-scary. Several days later, I had answers to all those questions: yes, I did train enough; yes, we were lucky and the weather held; I got into something special that not everyone gets to do — standing at what felt like the top of the world; and yes, it was awesome. Climbing mountains often is.

As we slowly started up the trail, I heard whispers of “I don’t think I can do this” and “What did I get myself into?” and knew that what they were setting out to do felt really scary.

A few weeks ago, I stood in front of 7 girls from the Montebello neighborhood in Denver, explaining how to set up the floorless tarp they’d be sleeping under for the next week. Through BCM partner agency Environmental Learning for Kids, all these girls had car-camped before. For four of them, though, this would be their first multi-day backpacking trip; the other three had come last year — so this was their second. The next morning, we stood in the parking lot of the trailhead and they tentatively helped one another shoulder their big backpacks. As we slowly started up the trail, I heard whispers of “I don’t think I can do this” and “What did I get myself into?” and knew that what they were setting out to do felt really scary.

During the week we spent in the backcountry it rained on us every day. The trail was steep. Uphill and down, the girls struggled — not just physically, but homesickness, anxiety, and fear caught up with each of them in different ways. Through the bond that comes in sharing a tent and a trail, the girls held each other’s hands, literally and metaphorically, through the experience. “I’m learning that sometimes you have to try really, really hard to make it to see the most beautiful things,” said Ronika during one of our evening discussions. Ronika, at that point, had perhaps struggled the most physically and mentally on the trail, but when we were in camp at night her smile and personality lit up the group. I was so proud to watch her, and her teammates, try really, really hard every day.

We go into the outdoors to find that piece of ourselves that gets lost in the hustle and bustle of the world, we go to remind ourselves who we are and what we’re made of. We drop our heavy backpacks one last time and we return to the world more equipped to thrive.

On our last full day in the backcountry, we had one ultimate hill to climb to make it to our final campsite. The girls planned our day with the goal of making it into camp by 3:00pm. As we lifted our heavy packs in the morning, I could feel their determination as we stepped on to the trail, and then we flew. We didn’t take any breaks; we just walked, steadily, up that last hill together. We celebrated as the trail flattened out, and when we stepped into camp at noon, three hours before our goal time, the feeling of accomplishment was palpable.

I’ve been thinking a lot about why playing in the outdoors is so valuable to me. It’s the best place that I’ve found to learn and grow. The lessons I learn on the sides of mountains I take back into my home, my community, and my workplace. Good communication, trusting others, managing stress, focusing on a task, making plans, and being flexible in those plans are just some of the tools that I’ve gained. And friendship — my best friendships have been forged on skin tracks, cliff-sides, wooded trails, in tents, and sitting side by side in the car on the way to a trailhead.

There are moments when you’re leading a group of first-time backpackers where you think, “Maybe this has pushed them too far. Maybe they actually hate this.” But then you hear giggling from the tent after a long day and realize that they are absorbing these same lessons: finding self-esteem, feeling accomplished, practicing self-care, caring for others, and letting themselves experience joy and contentment even when they’re cold and wet and far from home.

As we sat in a meadow next to a lake on our last night together Citlalli said that as we were hiking up the trail the first day she kept thinking, “What am I doing? Why am I here? Why did I say I’d come? Is this going to be worth it?” Over the week I had seen a visible change in Citlalli — she came alive in front of my eyes as she explored streams and lakes, caught a fish on a fly (and tried to catch fish with her bare hands), and ran and climbed and jumped in alpine fields. Because of the shift I’d seen, I put her on the spot and asked, “So… was it worth it?”

Later, Citlalli talked about telling her mom that she’d found a piece of herself that she felt had been missing, that she’d gained the self-esteem that she needed in order to follow through on goals she hadn’t followed through with before.

And isn’t that it — the reason we shoulder heavy packs — even though every time we do it, we question why we’re doing it again? We go into the outdoors to find that piece of ourselves that gets lost in the hustle and bustle of the world, we go to remind ourselves who we are and what we’re made of. We drop our heavy backpacks one last time and we return to the world more equipped to thrive.

I’m grateful for my time on mountains, but I’m even more grateful that I get to share those experiences with others — with close friends, with beginners, and with students. The reason my experience on Pico de Orizaba was “more than just a climb” to me was because the funds our team raised made it possible for Ronika and Citlalli to learn more about themselves through the power of the outdoors. If you’re interested in pushing your own limits and climbing a big peak, or customizing your own challenge, to support programs that allow under-resourced young people to discover themselves in the outdoors visit http://www.summitforsomeone.org. To learn more about how you can mentor a student on a Big City Mountaineers expedition visit http://www.bigcitymountaineers.org.

Our Summit for Someone climb of Orizaba would not have been possible without the generous support of Deuter, Nemo Equipment, LaSportiva, and Mountain Professionals. Thank you for helping us help under-resourced youth reach new heights.

Want more info on becoming a Summit for Someone climber?

Summit for someone
View All Posts